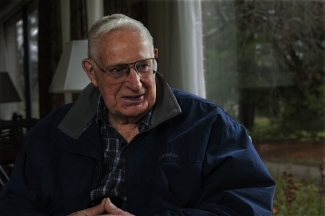 We are profoundly saddened by the death of Dr. W. Allyn Rickett on April 18, 2020.  “Rick,” as he was known, was beloved by faculty, staff and students alike.  He remained strongly connected to the department even after his retirement and was a generous supporter of all EALC initiatives.  He will be deeply missed.

Dr. W. Allyn Rickett (October 26, 1921 – April 18, 2020; aged 98) was professor of Chinese Studies and former Chairman of the Department of Oriental Studies at the University of Pennsylvania where he taught courses on Chinese language, history, and law.  He was born in Oroville, Washington.  He served in the Navy and Marines during World War II and studied at the U.S. Navy Japanese Language School in Boulder, Colo. from 1943-1944.  He used his Japanese language skills during the Battle of Iwo Jima.

After receiving his A. B. degree from Penn in 1948, he was awarded a Fulbright Grant for study in China.  From 1948-50, he studied Classical Chinese language and history and was a part-time lecturer in English at National Tsinghua University in Beijing.

During 1950-51, he held a Social Science Research Council Traveling Fellowship to study modern Chinese history at Yenching University in Beijing.  In July 1951, he was arrested by PRC authorities on charges of espionage and imprisoned there until 1955, when he returned home to continue his studies at the University of Pennsylvania.  He received his Ph.D. degree in 1960,

In addition to teaching at the University of Pennsylvania from 1959, he was a visiting associate professor at Stanford University for several summers and was a member of the Seminar on Traditional China at Columbia University.  From 1969-70, he was a Guggenheim Fellow, and in 1980, he was awarded a Three Year Grant from the National Endowment for the Humanities to complete a translation and study of the Guanzi:  Political, Economic, and Philosophical Essays from Early China, 2 vols. (Princeton:  Princeton University Press, 1985-1998; vol. 1 rev. Boston:  Cheng & Tsui, 2001), his magnum opus.  With his wife, Adele Austin Rickett, he was the co-author of Prisoners of Liberation (New York:  Cameron Associates, 1957; Doubleday and China Books and Periodicals reprints 1973 and 1981; translated into many languages), which details the account of their imprisonment in China from 1951-55.

In 1972 he became Professor of Chinese Studies at the University of Pennsylvania.  After 1975, he paid annual visits to China to lead tours and conduct research.  From 1978-80, he served as Chairman of the Department of Oriental Studies at the University of Pennsylvania.  He retired in 1987, earning emeritus status at that time.

He is survived by an adopted son, Jonathan Chen, an adopted daughter, Rebecca Lai Long, and four grandchildren.

The family requests that all contributions be sent to The W. Allyn Rickett Endowed Fund administered by the Department of East Asian Languages and Civilizations, University of Pennsylvania, 847 Williams Hall, 255 South 36th Street, Philadelphia, PA 19104-6305.

I still remember clearly the first time I met Rick.  It was around noon on the day I came to Penn for my job talk in 1979.  We sat down together in his office for a conversation.  He had a large cup of steaming noodles or potato soup or something like that.  As we talked, I watched him shake salt into the cup.  He kept shaking and shaking, slowly and continuously for what seemed like minutes.  I could not believe my eyes, and my jaw must have dropped half a foot, but I had to keep talking if I wanted to get the job.  It was like seeing somebody slowly opening ten or twenty packets of sugar and putting them into their morning coffee at a Starbuck's.  Only this was salt at noon!

I also have pleasant memories of Rick tending bar at department parties.  He was very professional in the way he mixed and served the drinks.  He was absolutely irreplaceable in that role.

I always referred to Rick (not to his face!) as "Hǎohǎo xiānshēng 好好先生" ("one who tries not to offend anybody; a man who is always polite and never says no"), so affable was he.  Another moniker I had for him was "Mr. Guan Zi" because he had devoted almost his entire scholarly life to studying, translating, and explicating this lengthy, complex, and difficult text.

One thing that Allyn loved to do was drive his motor home up to Northern Quebec in the summers and travel throughout the country.  It was always a delight to hear him describe his experiences when he returned to Philadelphia before the start of a new school year.

Allyn and Adele often had large groups of students and friends over to their house in Powelton Village.

He was always well-dressed and well-mannered, and spoke with a distinguished accent that I -- who pride myself on my linguistic acumen -- could never place.

Allyn was unassuming and humble.  I never saw him get angry about anything, even when others were being less than nice.

My recollection is that Jonathan and Rebecca were among the first, if not the very first, children from the PRC adopted by American citizens.  I do remember reading newspaper accounts of their adoption by the Ricketts which featured photographs of the event, one that involved the State Department.

What I recall most keenly about Rick was the conflict between his keen interest in contemporary China, based on his experiences there, and his feeling of obligation to translate an early classic, which was the conventional role of Sinologists when he was trained.

I remember sitting next to him at dinner at a Warring States Working Group conference when his second Guanzi volume came out, and he took rather well my question about the allegations of his being brainwashed during his time in prison.

(On his style of scholarship)  Allyn was intense up close, and his footnotes remain a wealth of information, especially about the work of previous Chinese and Japanese scholars.

© 2020 The Trustees of the University of Pennsylvania
Penn Weblogin