Ōoku: The Secret World of the Shogun's Women 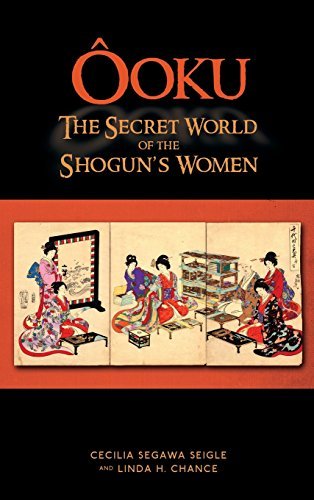 This thoroughly researched book provides an intimate look at the lives of the elite female residents of the shogun's elaborate compound. Drawing information from contemporary diaries and other private memoirs, as well as official records, the book’s detailed descriptions enable us to visualize this walled-in world that was off limits for most of Japanese society. It also outlines the complex hierarchy of positions, and gives readers insight into the various factions within the ooku and the scandals that occasionally occurred. The most accurate overview and characterization of the ooku to date, this book reveals how it developed and changed during the two and a half centuries of Tokugawa rule. A treasure trove of information, it will be a vital source for scholars and students of Japan studies, as well as women's studies. --Patricia Fister, International Research Center for Japanese Studies, Kyoto

Long the object of titillation and a favorite subject for off-the-wall fantasy in historical TV and film dramas, the actual daily life, practices, cultural roles, and ultimate missions of these women have remained largely in the dark, except for occasional explosions of scandal. In crystal-clear prose that is a pleasure to read, this book, however, presents the Ooku in a whole new down-to-earth, practical light. The authors have provided not only an overview of the fifteen generations of Shoguns whose lives were lived in residence with this institution, but how shoguns interacted differently with it. Much like recent research on imperial convents, they find not a huddled herd of oppressed women, but on the contrary, women highly motivated to the preservation of their own particular cultural institution. Most important, they have been able to identify "the culture of secrecy" within the Ooku itself to be an important mechanism for preserving the highest value, 'loyalty,' essential to their overall self-interested mission dedicated to the survival of the Shogunate itself. --Barbara Ruch, Columbia University

© 2021 The Trustees of the University of Pennsylvania
Penn Weblogin